How Others View America: The Land of Poverty, Neglect and Death

Europeans have a very different view of American than we do of ourselves. Sometimes, the view through another’s eyes is instructive. Here’s what The Guardian (UK) sees:

A journey through a land of extreme poverty: welcome to America

The UN’s Philip Alston is an expert on deprivation – and he wants to know why 41m [million] Americans are living in poverty. The Guardian joined him on a special two-week mission into the dark heart of the world’s richest nation 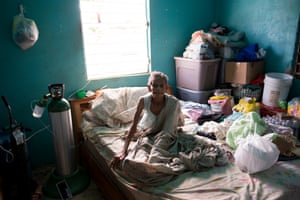 Lyn and I know people in this situation. This is real.

Let me close this short post with the lyrics of a Chieftains’ song that seems to resonate in this country and this time. The Jackson Browne cover for this song is here, but read the lyrics first: https://www.youtube.com/watch?v=Tr1d0ivyTTk

But please forgive me if I seem
To take the tone of judgement
For I’ve no wish to come between
This day and your enjoyment
In this life of hardship and of earthly toil
We have need for anything that frees us
So I bid you pleasure
And I bid you cheer
From a heathen and a pagan
On the side of the rebel jesus.

In America, unlike other countries, life expectancy is highly correlated with wealth. We seem to be trying to solve the “Social Security crisis” by making sure many of the poor die before they can file claims. However, the U.S. was found to be on course for the lowest average life expectancy levels of all the rich countries worldwide. The study predicted an average age of 83.3 for women and 79.5 for men by 2030, not dissimilar to levels forecast in Mexico and Croatia. Current levels are 76.5 for men in the U.S. and 81.2 women, according to the study.

“(The U.S.) are almost the opposite of South Korea,” said Majid Ezzati, professor of global environmental health at Imperial College London and the leader of the latest medical research. “(Society in the U.S. is) very unequal to an extent the whole national performance is affected – it is the only country without universal health insurance,” Ezzati added.

The research described how the U.S. has the highest child and maternal mortality, homicide rate, and body-mass index of any high-income country.

“The USA is also the only country in the OECD (Organization for Economic Co-operation and Development) without universal health coverage, and has the largest share of unmet health-care needs due to financial costs. Not only does the USA have high and rising health inequalities, but also life expectancy has stagnated or even declined in some population subgroups,” the research document said.

And a happy holidays to you, too.