Being narrow-minded affects people in a broad range of occupations, including 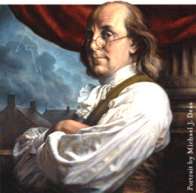 academia. Most people working in one field don’t see what people in related field are doing. Truth literally “falls between the cracks” separating different areas of work.

The people to whom we ascribe brilliance, like Steve Jobs, are those who are able to gather information from a broad array of sources and disciplines and connect the dots to form a coherent picture that others can’t see. Others fail to see the same because they don’t look. They limit what they see to the portion of the world in which they live and work.

In an earlier blog, I reported on research linking being a victim of bullying to depression and health issues in high school. (1) The theory is that the impact of bullying can last well into adulthood.

A new study by Deborah Gibson-Smith from VU University Medical Center in the Netherlands and colleagues reports on a link between being overweight as a child and adult depression. The study doesn’t explain how extra pounds as a child effect adult emotions; it simply reports a statistical relationship. (2) The premise is that it has something to do with self-image.

My theory: Overweight children get bullied, and that bullying causes negative attitudes and behaviors that can linger into adulthood. It’s a simple idea, testable, and provides a concrete mechanism for converting excess weight as a child into adult depression.

Does that make sense?