I wrote a few days ago that the states most reliant on Federal assistance are the ones also most likely to vote against it. It seemed like an absurdity, but it may have a simple explanation — religion.

Here are the states with the worse life expectancies in the US.(2) 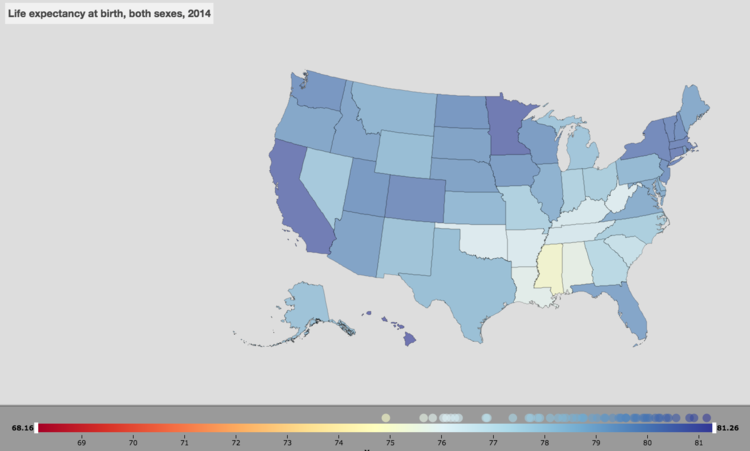 Specifically, the bottom 8 are (the number is average life expectancy for a child born in 2014 in that state)

50. Mississippi: 74.91 (life expectancy is a lower in the counties along the Mississippi River valley)

All have life expectancies below the national average.The US average in turn is well below most industrialized countries. The highest is Monaco, with 90 years.

As noted in previous posts, most of the listed states rank lower on education level, income, healthcare, and public health spending than the norm for the US. Several are well above the national average for smoking.

Seven of the eight states are the same on both lists. I suspect that’s not an accident.

The states with the fewest evangelicals are Utah (7%) and Massachusetts (9%). With a strong economy, Massachusetts has seen a slight decline in the number identifying as evangelical since 2007.

Obviously, many evangelicals protestants in the South don’t believe in the adage that “God helps those who help themselves.” What they are doing now is depending on God and out-of-state taxpayers to take care of them.

This goes hand-in-hand with the observation that in terms of sheer numbers, most people living below poverty level in the US are white.

Final note: After I wrote the above, I came across a report about the most dangerous states in the US in terms of violence. Guess what? A couple of the same states are also on that list.

But then poverty and crime go hand-in-hand.