Here are a few pithy charts that can shed light on the frustration and violence in US society. While Putin might have tried to stir up violence in 2016, he could do so because of the tensions and fractures that exist.

Most people aren’t Bill Gates, won’t see a winning lottery ticket, beat a casino out of big bucks, or make it into the top tier of professional sports or be a rock star. Statistically, a few do, but they’re the exceptions.  For the rest of us, if you get to Carnegie Hall, its by “practice, practice, practice.” And if you want a job that pays better than poverty level, it means learning a skill or going to college. Skilled jobs have a good chance of being automated out of existence.

There are and will be more jobs for college grads than there are grads, and they get paid a lot better. The H1B program is driven by the lack of educated workers. The average worker with a bachelors degree makes almost double what a worker with a high school degree earns. 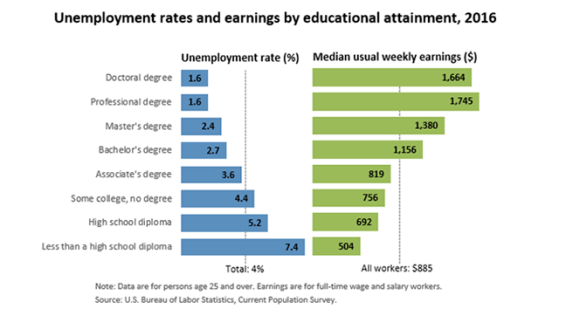 Stebbens and his colleagues remind us that a work force lacking in education goes arm-in-arm with high rates of poverty, unemployment and crime (4).  They note specific glaring examples such as

Conversely, in Columbia, SC, 40.7% of residents have a  bachelors degree, and it’s described as one of the fastest growing cities in the US.

Bluntly, why would an employer choose to build a facility in an area with an uneducated work force when they have better options available?

What happens when people take the future for granted and suddenly realize they have none?  (In the classic literature on political development, that’s the source of revolutionaries and terrorists.)

“Pay me now or pay me later.” By not providing low cost education, we guarantee higher spending on public assistance, healthcare and jails. As a society, how does that make sense?

New York State and San Francisco understand the situation: trade off high spending now on education for lower spending in the future on a range of services.

China understands this trade-off, just in a different area: their national campaign against obesity is designed to engineer massive long term reductions in health care costs.

The Conservative movement doesn’t get it, at least not in the US: if you want to preserve capital and reduce public expenses, this is how you do it. There is no magic, short term fix to a problem created over decades.