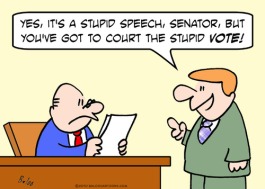 We’re off to a fast start.  Representative Sam Johnson (R, Texas, 3rd District) has introduced a bill to reform Social Security.  The bill has some of the usual characteristics we have come to expect from reform legislation:

Like the Affordable Care Act, this bill has no chance of passage as it is written.  It will be revised extensively and provisions unrelated to Social Security will be appended to it.  That’s how Congress works (or doesn’t work, depending on your point of view).

The introduction of the bill simply signifies “Game On.”

It’s the call for the various warring parties (lobbyists) to muster their resources and have at it.  If you look at the sources below, the spin doctors are already hard at work.  It’s actually hard to tell that they are writing about the same topic.

Keep your eyes open, and  watch this space.  If and as meaningful things happen, I’ll write about them here.

Or, if Congress does nothing, I’ll write about other things that matter.